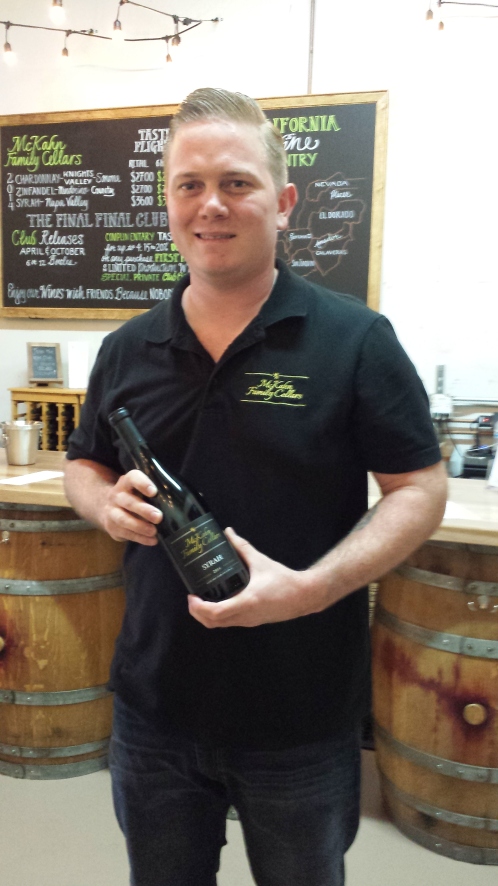 Charles McKahn’s background includes receiving his enology degree from Cal Poly San Luis Obispo and moving to Napa Valley for the last five years. He has worked as an assistant in various capacities at Chappellet Winery and was just recently name winemaker at William Harrison in Napa. Rather than using a custom crush facility, he will be producing his wines in Napa.

So technically he is not a “rookie”, but his family (Kevin, Denise & Brittany) just opened the McKahn Family Cellars with Charles as their winemaker. At age 25, he is definitely one of the youngest winemakers out there. Charles and the McKahn Family Cellars out of the gates are offering three distinct varietals – all of which are solid “base hits” and a rare feat for their first vintage.

The offerings are: 2014 Knights Valley Chardonnay, 2014 Mendocino County Zinfandel and 2014 Napa Valley Syrah. The Chardonnay release is about 150 cases and using 1/3 French oak, but no Malolactic fermentation. This provides a Chardonnay without the heavy butter taste but gives it depth with the oak. The subtle pineapple, pear and slight citrus comes through as refreshingly uplifting. Personally, I think this is their best offering and a “double or a stretch triple” in baseball lingo!

The second offering is their Zinfandel which 225 cases were produced. He blends 80% Zinfandel with 20% Syrah for this light Zinfandel. Charles describes it as “red and black currants accompany a sweet note of Irish cream derived from the American oak barrels”. It is smooth and lingers on the palate. The Zinfandel come from Mendocino.

The last offering and what he states as his goal as winemaker is to produce the best Syrah coming out of Napa Valley. It is eye opening to see a newcomer come up with another direction for Napa Valley. Obviously, Napa doesn’t need “another Cabernet Sauvignon” producer!! His love affair with Syrah started some time ago and he is striving for a smooth and well balanced Syrah. They produced 180 cases and believe he is well on his way with this first release. At the recent 2016 SF Chronicle Wine Competition, they received a Silver Medal.

McKahn Family Cellars is not located on the “wine trail” but near the intersection of Hwy 580 and Vasco Road on 503 Leisure Street, Livermore in a commercial building. Seek them out on your way to the trail and you will not be disappointed. Maybe the Rookie will autograph your bottle for a collector’s item, better yet buy two and drink one!