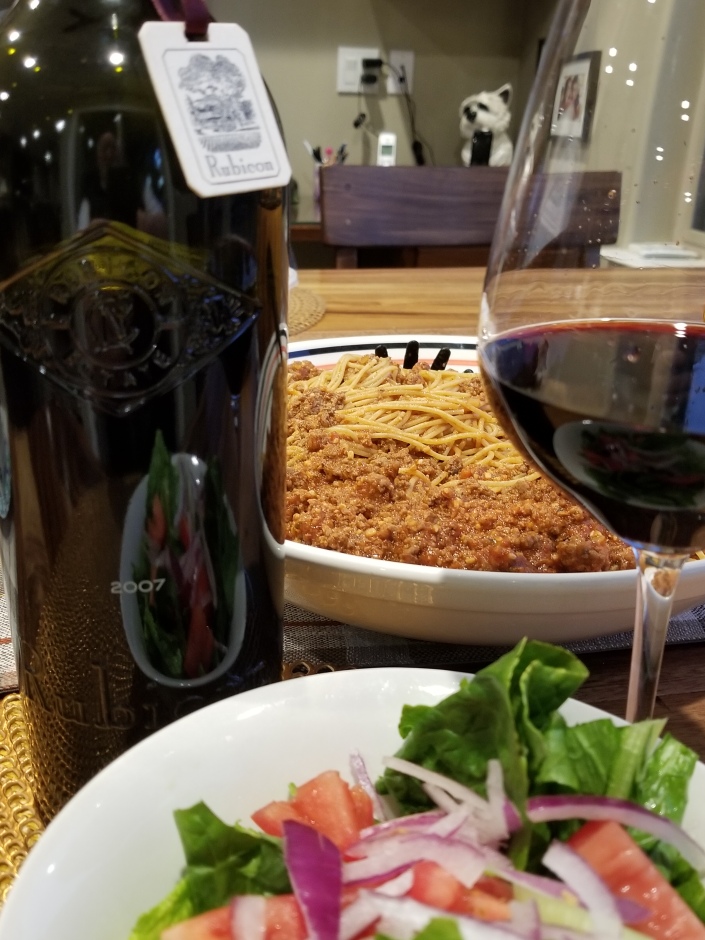 Not knowing how long we were going with electricity, I had pulled a few bottles to get us thru the electricity cut off by PGE. Figuring we had a few steaks in the freezer, picked a couple of nice wines from the cellar. As it turns out, due to four ice chests, our freezer being kept shut, replacing ice after two days, etc., the steaks were frozen solid. My wife had some ground chuck that was in the line of coolers and had started to defrost, so spaghetti was our targeted meal in the dark last night! Unfortunately and fortunately, the one bottle of wine not left in the sealed wine cellar was an exquisite and well-aged 2007 Rubicon Cabernet Sauvignon. Just as we were about to sit down for dinner, the lights after 3 days and 18 hours came back on!!

This wine is 94% Cabernet Sauvignon, 4% Petit Verdot and 2% Cabernet Franc. In 1995 Niebaum-Coppola acquired this historic property and restored the named Inglenook. Rubicon was their flagship wine with an embossed glassed logo. Today it is their historical paper version. On the eyes it had a deep purple and medium weight viscosity greeted one with anticipation. On the nose, aged leather, coffee, tobacco, black licorice and plum filled the senses. On the palate, the predominance of Bing cherries (which you do not get on the nose) bursts in the mouth. This coupled with vanilla, blueberry and cocoa along with some background floral notes provided so much in this one bottle. The finish was smooth as silk as the tannins were present but tamed. Especially after 12 years being cellared, made this a spectacular wine. With different circumstances I would recommend a prime rib, tri tip or ribeye with this instead of spaghetti, but it was still wonderful. The best spaghetti wine I have enjoyed! 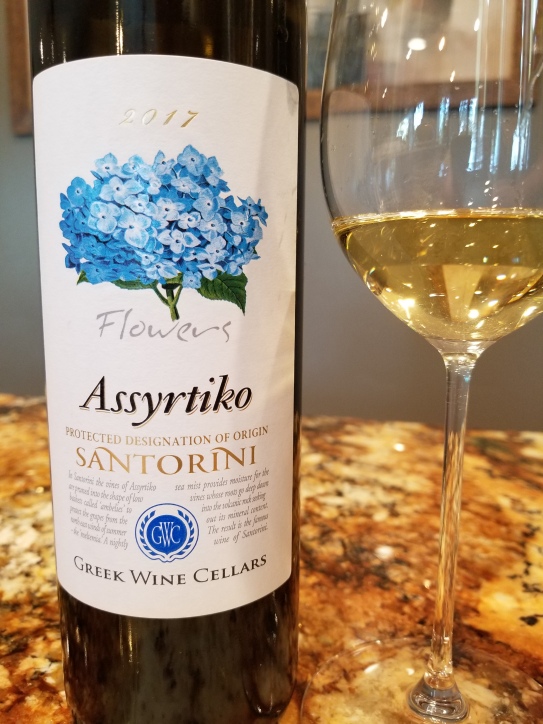 Not an everyday household varietal but perhaps it should be! Firstly, this wine is indigenous to Santorini and was the wine of choice from 3500 BC to 1620 BC as the wine center in the Aegean Sea. In 1620 BC, one of the largest volcanic eruptions occurred in the last 10,000 years on Santorini. It covered the island in volcanic ash which provides a unique soil for Assyrtiko grapes to grow. Secondly, the pronunciation is “ase-ry-tiko”.

The island with its volcanic soil, the Assyrtiko vines can go down as far as 60 meters! This depth is one of the key components in giving this grape a minerality like no other grapes. Assyrtiko vines comprise 70% of the production wines of Santorini. Also some of the vines go 60-200 years in age. But perhaps one of the unique things is the training of vines in a circular basket/wreath formation. With the grapes growing on the inside, it provides shade from the hot summer sun and protects the grapes from the fierce winds of the island. The basket is called a “kouloura”.

The grape varietal is known besides its minerality, to have citrus, apple, honeysuckle, passion fruit, pear, lime and beeswax. This 2017 Flowers Assyrtiko which I tasted had the heavy presence of minerality, citrus, hint of lime and beeswax. This wine  with high acid begs for oysters, salmon, trout, etc. Even shrimp and shell fish would do well. It was paired with pork roast with mango & apricot sauce and was quite tasty. 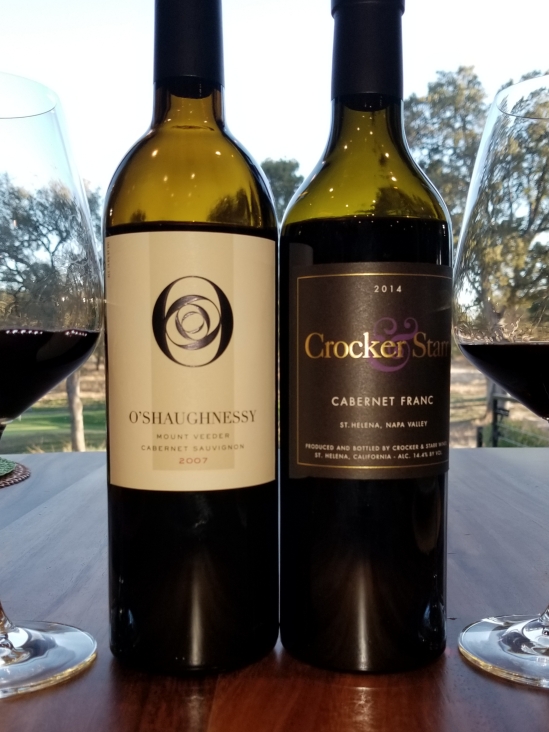 Two of my all-time top 30 wines last night!!! A 2007 O’Shaughnessy Cabernet Sauvignon Mount Veeder and a 2014 Crocker & Starr Cabernet Franc. First the 2007 O’Shaughnessy Cabernet Sauvignon from the west side of the Napa Valley, Mount Veeder. On the eyes, a dark ruby coloring with medium viscosity. On the nose, a woody but sweet briar, with red fruits waffling into the nose. On the palate, extremely concentrated fruits, licorice and black cherry exploded in the mouth. The finish had some strong tannins, but without any “edginess” which provided for a long velvety crescendo.

The 2014 Crocker & Starr Cabernet Franc possessed a bright purple hue on the eyes. On the nose, a fascinating combination of plum, vanilla and clove were the first impressions. On the mouth, a classic “green vegetable/bell pepper” characteristics which gave way to dark & red fruits, tea and a hint of dark chocolate. The finish was long and mellow with residual sweet pipe tobacco. Last year on International Cabernet Franc Day at our “beta event”, the 2015 Crocker & Starr came in second. If we had tasted the 2014, I am sure it would have won!!  Who will win this year on December 4th, International Cabernet Franc Day? 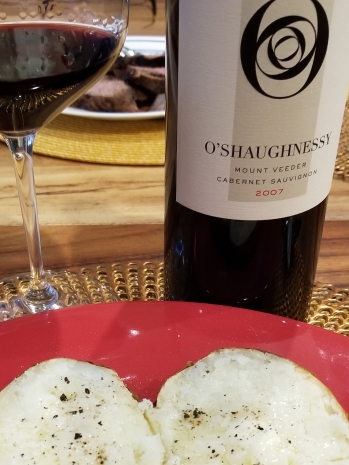 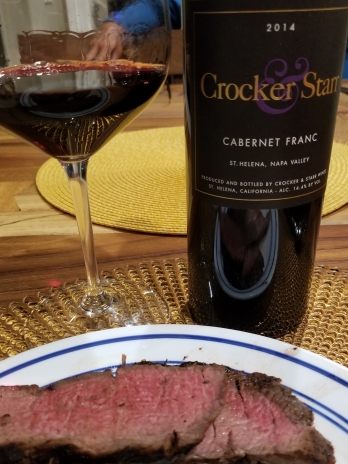 Both were decanted and the flavors were brought to life with the food that Susan Becker Kelly prepared. Had a tri tip with baked potatoes and salad for a wonderful meal. 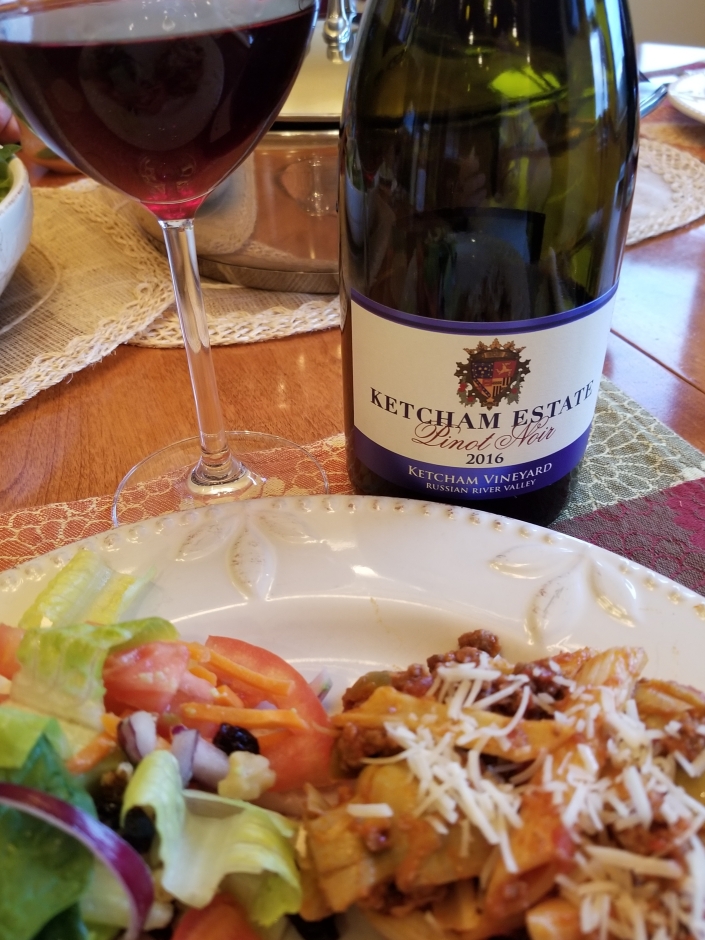 I have always compared Pinot Noir to a ballerina verses a Cabernet Sauvignon being a prize boxing fighter. The elegance of Pinot Noir is refined and feather light and delicate on the eyes and mouth. This 2016 Ketcham Estate from the Russian River Valley was true to the graceful Pinot Noir characteristics, yet had enough brawn to provide a real fullness in the mouth. On the eyes it was a shade darker than some higher end Pinot Noir’s. On the nose strawberries and cherries were predominate. On the palate is where this wine moved into a fulfillment and wonderment with both tart and sweet cranberry, vanilla and spices. It had a long lasting finish with soft and round tannins couple with strawberry licorice. A perfect complement to pasta with a tangy meat sauce. 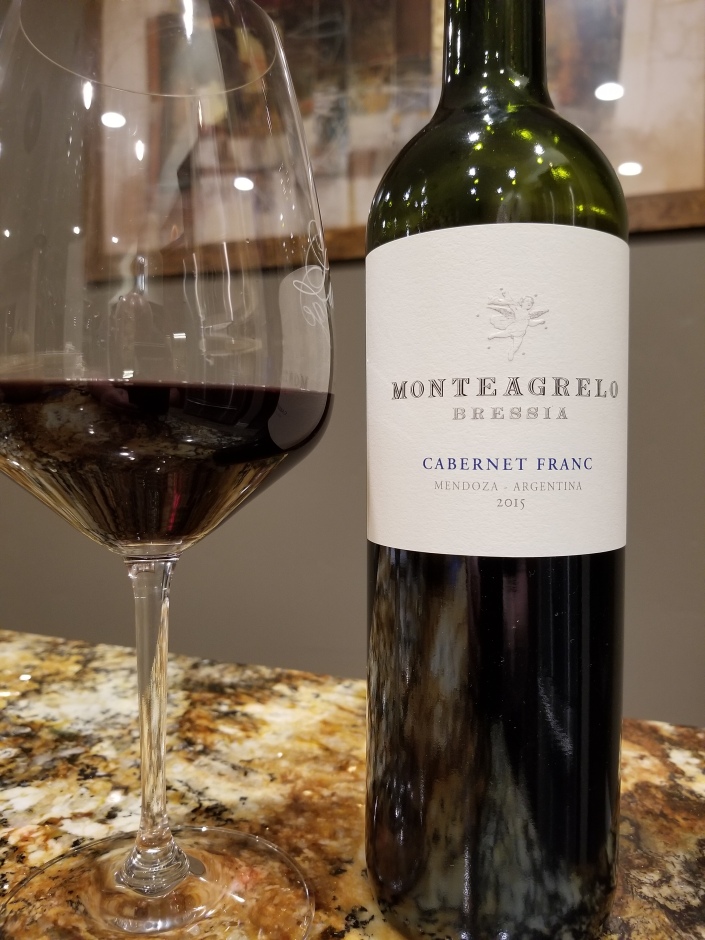 This was the winner of our “beta Cabernet Franc competition in 2018. This week we re-visited it to find only marked improvement! From the Uco Valley in Argentina, this varietal is explosive. Still with ruby red and deep purple hues on the eyes and a medium-heavy viscosity. On the nose red raspberries combine with aged oak and soft sweet pipe tobacco. In the mouth, the red and black cherry fruit jumps to the forefront with oak, along with typical herbal notes and makes a complex and “almost chewy’ Cabernet Franc. This won in 2018 in the “Objective Classical Category” with a 2015 Crocker & Starr winning the “Subjective People’s Choice Category”. Who will win this year? Read more on this years competition at: https://californiawinesandwineries.com/2019/10/09/california-wines-and-wineries-announces-cabernet-franc-wine-competition-on-international-cabernet-franc-day-december-4th/ 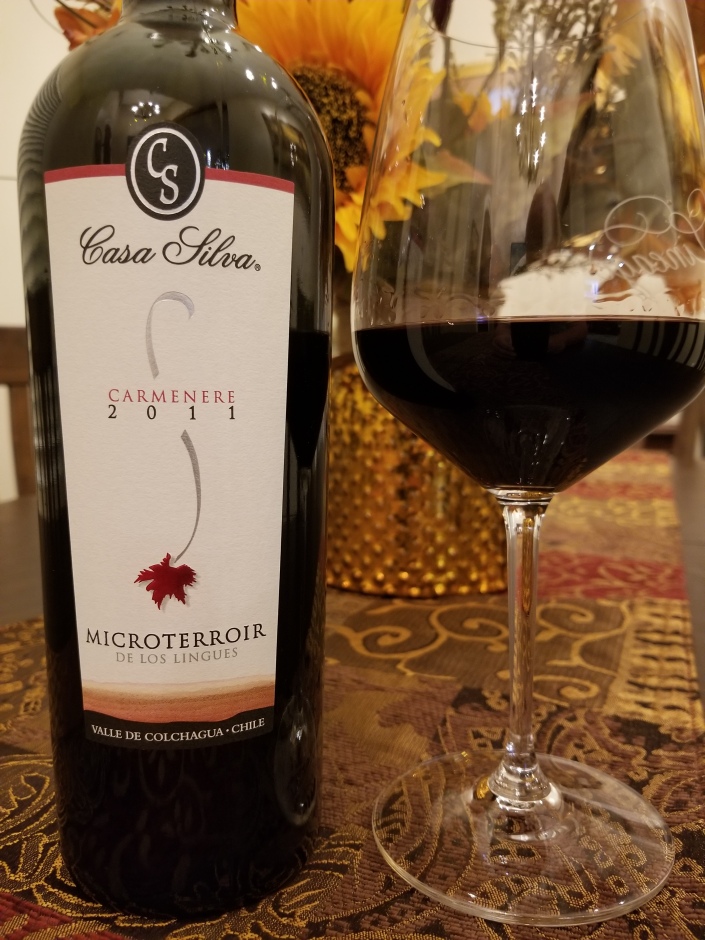 This is perhaps one of Chile’s most famous wine producing areas. This high altitude vineyard in the Colchagua Valley, starts off at 1,000 foot elevation and goes to over 3,000 feet, produces some of the best examples of Carmenere fruit. The wine from this area provides a distinctive smoky and spicy character to the wine. Dark cherries and black fruit swirl in the mouth. An “old world” taste provides a lasting finish. A perfect pairing with pork or beef. Actually had this with a pepperoni pizza and still was winner!

If you are a California vintner and make a Cabernet Franc, here is a great opportunity to highlight your wine in the market place.

The First Annual Cabernet Franc Wine Competition, Sponsored by California Wines and Wineries, Featuring Award Winning Wines from California will be held at The Golf Club at Copper Valley, Copperopolis on December 4th, 2019

This inaugural event is open to wineries within California who produce Cabernet Franc. This is a single varietal competition. The event will have two different judging tables. The first being professional judges, SOMM’s, Winemakers and WSET members. They will distinguish and nominate wines in four categories: Cabernet Franc’s less than $30, $31 to $60, $61 to $99 and $100 and up. They will be scoring wines in two fashions, the first being the varietal characteristics being true to the classical definition to determine an “objective” winner. The second, being on personal preference or taste for them or a subjective preference. A unique format. To further make this an enjoyable and impactful event, a table of “consumer wine enthusiasts” will hold a parallel tasting. These will consist of everyday wine enthusiasts providing a “people’s choice” wine winner. Plans for the 2nd Annual will include wines from the other 49 states with public tasting to be included.

The event will be a blind tasting with wines open to all AVA’s in California. Each group, professional and wine consumers, will be using the “Danish System”, sometimes called the “Group Method”. Each wine is measured against standards and not ranked against competitors. Awards will be given for Gold, Silver and Bronze. Tom Bender has agreed to lead the “professional judging”. Tom Bender has served as the Sierra Foothills Wine Competition organizer for over 35 years and is a contributor on food and wine to several foothill and valley magazines and newspapers. Tom also serves as a judge at the California State Fair Wine Competition. We have two winemakers (not making Cabernet Franc-one from Lodi and one from Napa), a WSET II and more being added. See separate sheet on the Judges background.

The diversity in Cabernet Franc from Southern California to Paso Robles to Livermore to Napa Valley to the Sierra Foothills offers different “terroir” and flavor profiles, yet all have a core characteristic of this varietal.

The recently remodeled Clubhouse at Copper Valley, in Copperopolis will be an exquisite venue to kick off this event. Any questions can be directed to Michael Kelly at mkellywine@gmail.com or (408) 605-1292. 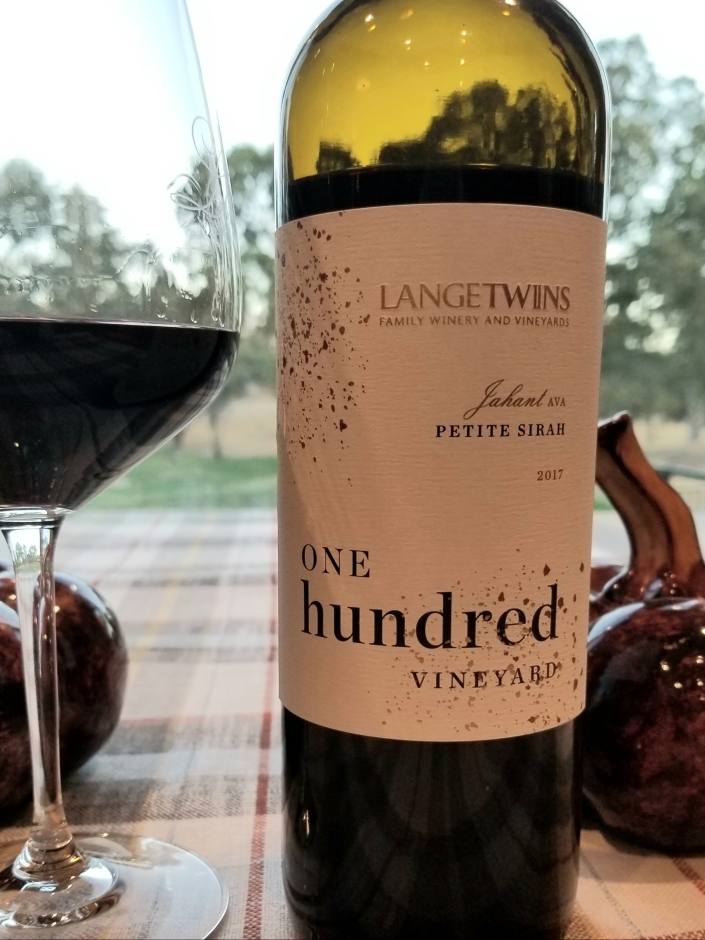 This is the first vintage Petite Sirah from the One Hundred Vineyard by LangeTwins. The Jahant AVA is the smallest of Lodi’s seven AVA’s. This area is unique as it sits on a river terrace and old flood plain with rich soils and deposits. The first thing you notice is the immensely deep color and the lushness of the viscosity. On the nose, aromas of blackberry and blueberry abound and beckon the first sip. Once on the palate, violet and bittersweet chocolate swirl with delight. The aging in both French and America oak adds just enough influence and spiciness to make a long and enjoyable lasting finish. 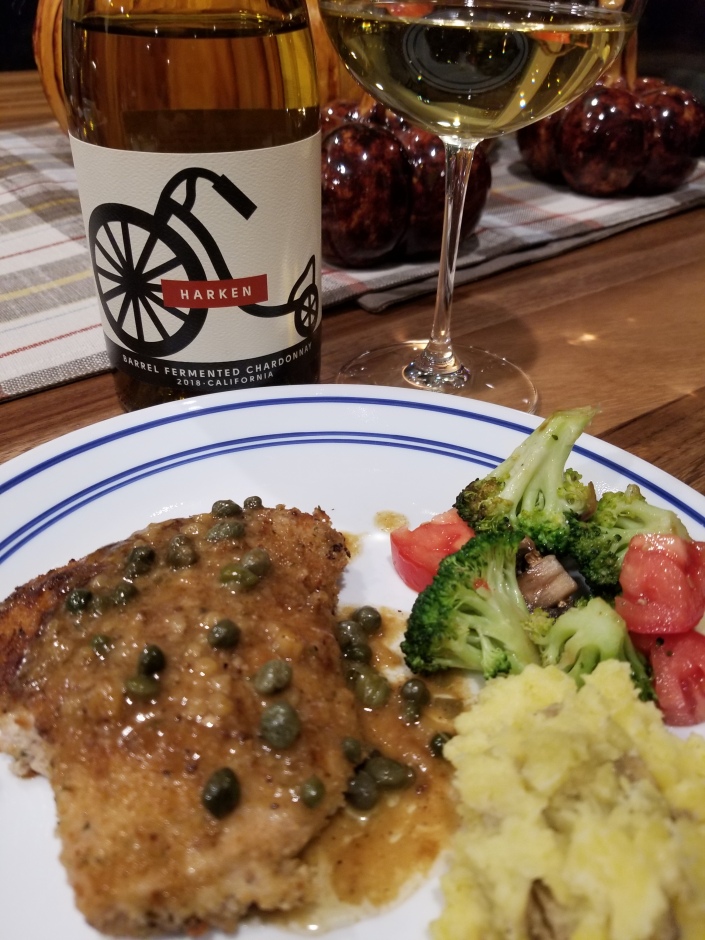 Last night had a 2018 Harken Chardonnay. This is now a wine handy for neighborhood gatherings. This is a Rombauer “cousin” in taste profile. If you want crème brulée and mid-buttery Chardonnay, look no further. Oak and pear also are present on the nose and palate along with a hint of citrus. Paired with chicken picata, Yukon gold mashed potatoes and medley of sautéed vegetables with Roma tomatoes. 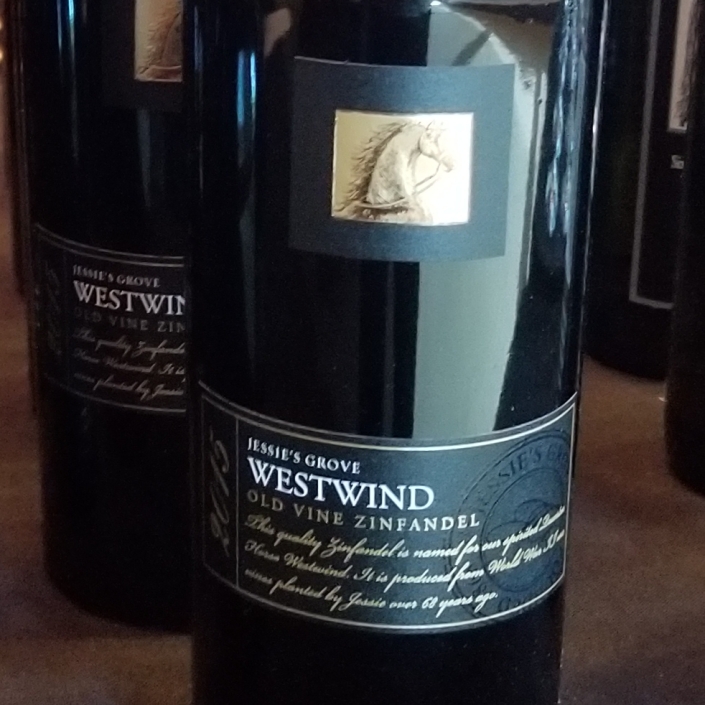 The 2015 West Wind Zinfandel was served with dinner this week at one of the Saddle Creek Wine Society Board Members home. It was a party dinner for friends in the San Francisco East Bay playing golf the next day and a few “locals”. This wine had aromas of berries and chocolate covered cherries with a hint of black pepper. It finished with berry fruit and leather flavors. It was paired with a slow Bbq’ed Tri-tip, Julian sliced baked potato casserole, fresh string beans, French bread, garden salad and a beautiful apple pie a la mode for dessert. This casserole recipe included: sour cream, cheddar cheese, onion, celery, pimento, garlic and chili powder – topped with panko breadcrumbs and Parmesan cheese. It was “over the top” with the beautifully served tri-tip. A wonderful meal-thank you Ray’s! 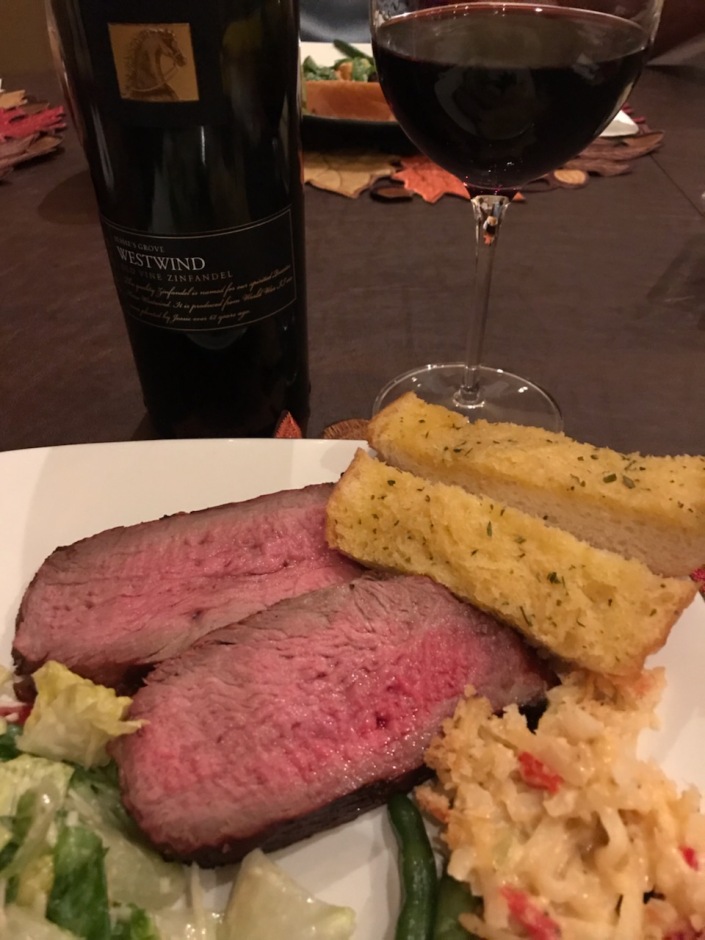