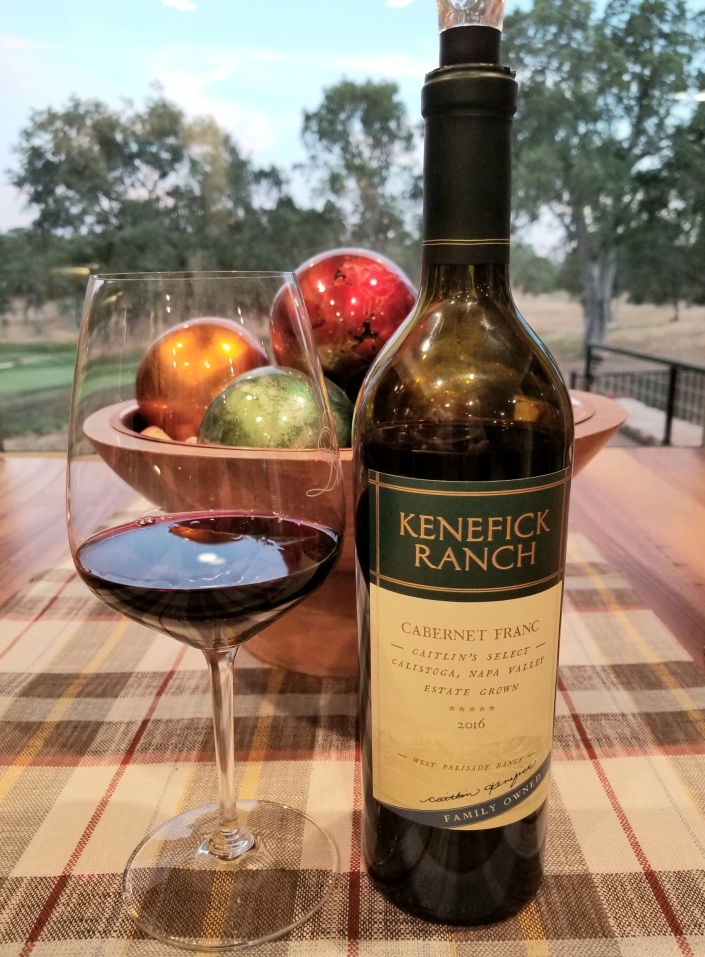 This wine was a “true dark horse” in more than one way. First I had previously never tasted anything from Kenefick Ranch, so it was a bit unknown. But as soon as it was poured, with its dark violet and crimson coloring, I knew something truly special was about to happen. Sure enough. from out of nowhere, this wine became an instant winner!

The Winery
The Kenefick family has roots back to Ireland as farmers. They made their way originally to Iowa and then Minnesota. Tom Kenefick was the third in his family as a physican and then went on as a practicing neurosurgeon in San Francisco. He found the property of 250 acres in 1978. On site, the goal was to focus on Bordeaux style varietals. Today they produce Petit Sirah, Malbec, Merlot, Cabernet Sauvignon, Cabernet Franc and a red blend. Also they have a few whites, like Sauvignon Blanc, Grenache Blanc and a white blend. Most of the wines are award winning with scores in the 93 to 95 point range.

The Wine
This 2016 Cabernet Franc is Estate grown in Kenefick Ranch sustainable farmed vineyards in Calistoga. The wine consists of 82% Cabernet Franc, 9% Merlot and 9% Petit Verdot. It was aged 18 months in 65% new French oak and 35% neutral French oak barrels. Only 400 cases were produced. On the eyes, it is bold and begs one to be introduced to its welcoming and bright personality. On the nose, red cherry and plum swell into the olfactory senses. Once on the palate, soft leather, sweet pipe tobacco, chocolate and cherries swirl in the mouth. And when it warms up, the hint of pyrazine, the scent of green bell peppers wafted in the air as all good Cabernet Franc’s do. The finish was strong and long lasting. It will go at least another 10 years in the cellar. This wine was rated at 94 points and is priced at $50.

At California Wines and Wineries Annual Cabernet Franc Wine Competition it was rated by the Professional Judges for a Gold Medal. The People’s Choice Judges, gave it a Bronze Medal.

So this “unknown dark horse” came out galloping to the winners circle. Can’t wait to taste some of their other Bordeaux varietals as I know they are thoroughbred stallions!