While Ovello Riserva is from Barbaresco, in northwestern Italy, it is such a fine wine their story needs to be told. Barbaresco is known world wide for their Nebbiolo varietal wines. Often people do not distinguish the difference, one being a place and the other being a grape varietal. This small village has only a population of 650, which I learned from a previous visit.

Nebbiolo wines from this region hold strong tannins, high acidity and a distinct “old world” aroma. Nebbiolo wines tend to come out young with dark red juice and fade over time from a “brick orange” to violet color. The word nebbia (fog) where fog hides in the valleys and vineyards. Also this late harvested varietal can be done in foggy and winter weather conditions.

Producttori del Barbaresco was founded in 1958. The village priest of Barbaresco determined the only way small properties owners could survive was to form a cooperative. It started out as nineteen small growers and today is fifty one. Each of the vineyards are listed on the back of the nine varietals of Barbaresco produced. For the Ovello 2011 Vintage, the vineyard are listed on the back of the bottle. For example the owners of the vineyards for this release are: Audasso, Cavallo, Cravanzola, Gonella, Grasso, Maffei, Odore, Rocca, Sarotto, Unio, Vacca and Varaldo. Italy and especially Piedmont, account for 99% of the worldwide production. The total cooperative produces 45,000 cases per year. The USA production is extremely limited and California’s production is only 145 acres per the latest Wine Institute report.

(hillside around Barbaresco with Nebbiolo vineyards)

Ovello typically get between 93-94 point ratings from Wine Spectator and Wine Enthusiast. Key for the Producttori del Barbaresco is that they age the wine 36 months in large oak barrels and then 12 months in the bottle before releasing as a Riserva after holding for 4 years. They will continue to develop in your cellar for up to 20 years. 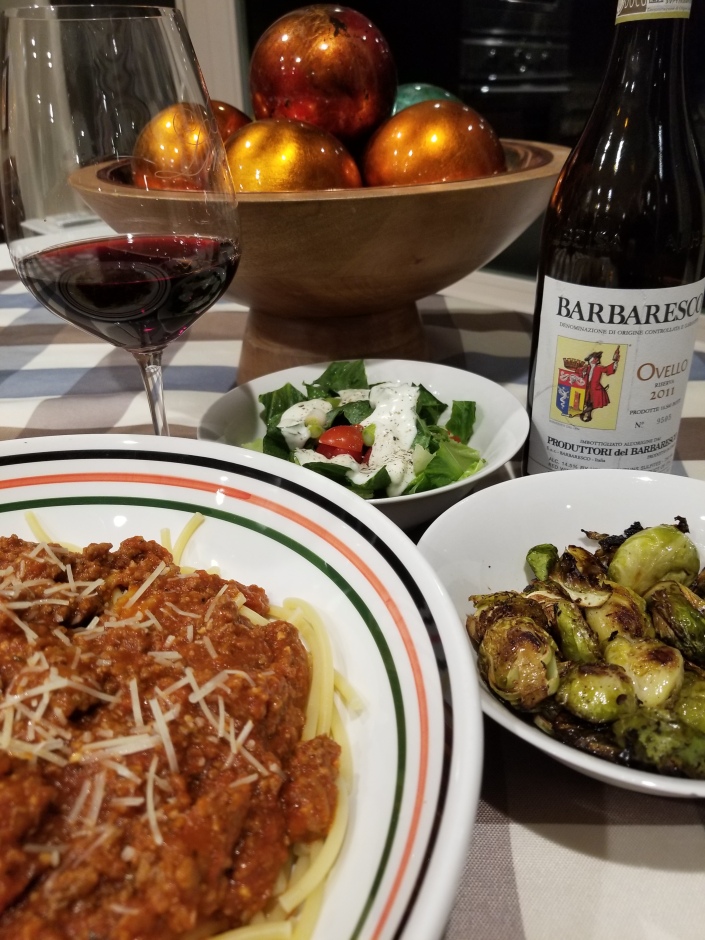 Foods suggested to pair with Nebbiolo wines are fresh egg-pasta dishes, risotto, white and red meat, game, venison. So when the dinner menu called for Bucatini pasta with a red meat sauce, roasted Brussel Sprouts with Balsamic vinegar, olive oil with seasonings and a garden salad with Blue cheese dressing, this wine was selected from the cellar.

On the eyes, a bright dark fruit but with a translucent ruby red wine on the rim with a medium body was present in the glass. On the nose, violet perfume notes along with intense floral and fruity aromas. On the palate, is where this wine burst out with red fruits, balsamic notes and a hint of anise. One of the distinct flavors picked up was dried cranberries and soft leather. The finish was long lasting and elegant with the balanced tannins and multi-layered structure.

Nebbiolo is a wine still under the radar for the general wine community. Pick up a bottle of Nebbiolo from Barbaresco and compare to some of the Nebbiolo’s being produced in California. You will enjoy the tasting adventure!