2015 Coquelicot Estate Cabernet Franc Reserve – Everything You Ever Wanted!

It is not often you try a wine from a winery and it picks you up and slaps you alive like you have never been before! More on this shortly! That was almost the experience with the 2015 Coquelicot Cabernet Franc Reserve (pronounced ko-klee-ko). In French, it is the name of the bright red poppy flower that is everywhere in the French countryside.

Their winemaker Mike Roth, received his training back in North Carolina then moved to Napa Valley. There he enhanced his craft from some of the founding pillars of Napa Valley, Nils Venge (Saddleback Cellars) and Mike Grgich (Grgich Hills). He became enamored with biodynamic farming and after going back to Fresno State, ended up at Demetria, a biodynamic property in Los Olivos. After a few other wineries including his own, he was committed to a style of winemaking using indigenous yeast, little or no sulfur dioxide and handcrafting his wine with old fashion techniques. Today the results shine through in his clean, clear and drinkable wines. 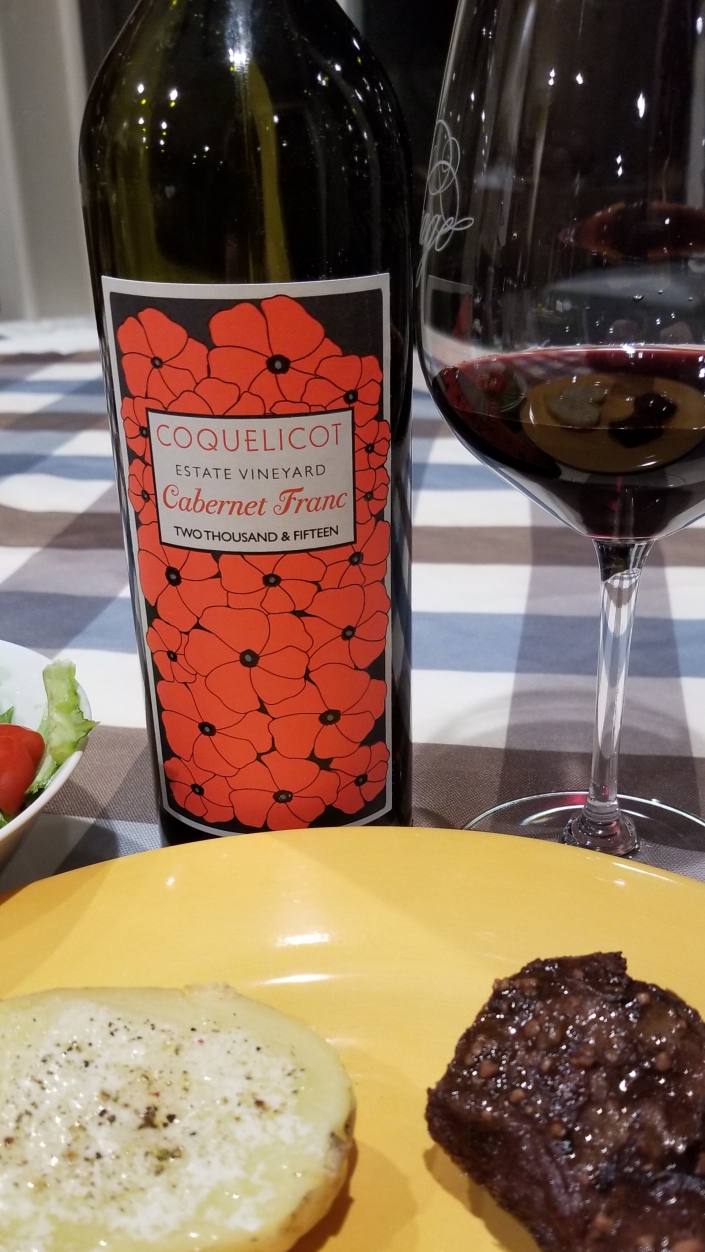 Last week we had a dinner that was made with an Instant Pot, of beef short ribs. The ribs were cooked in a garlic and wine sauce, after marinating in Cabernet Sauvignon wine for 48 hours. Add a Yukon Gold potato and salad and you have a great meal, with the meat falling off the bone. Paired with the Coquelicot 2015 Cabernet Franc Reserve, the meat was beyond delicious.

The wine is made from 100% Cabernet Franc grapes using selected vineyards. A classic profile for this varietal, with dark Ruby coloring with purple hues, brilliant clarity and medium body. The nose was met with blackberry, cherry, plum, violets and a tinge of tobacco and vanilla. On the palate, when taken with a piece of the short ribs, the soft acid and tannins, encapsulated and broke down the meat to provide a delightful dance of ecstasy in the mouth. The finish, with the meat, provide a lasting and graceful completion of the wine experience. Kudo’s to both Mike Roth and Susan Kelly who prepared the meal. It was a like synchronized swimming exhibition with strength and finesse in perfect harmony.

This was a great pairing of both food and a wine of grandeur! The only thing I kept thinking is why didn’t they enter this in the California Wine and Wineries Cabernet Franc Wine Competition? It surely would have been a crowd favorite! Maybe this year? The bottle retails at $75 and is still a value.