What you see is not what you get! Let me explain. When you first arrive at Arkenstone, you view a medium sized brown modern but “plain” metal building.  The grounds are pastoral with vines in view. There is an inviting and casual patio and some crush equipment in an “open air” covered area. Looks like a quaint and small operation at a typical 1500 foot elevation Howell Mountain winery. Nothing could be further from the truth.

The entire operation is essentially “underground”. The impact on the environment is almost nil. The operation is set up on a gravity flow system from above, down to the caves forty five below which are immense.

First let me introduce a few key people of Arkenstone. The owners are Susan and Ron Krausz. Susan was our host for the day. Originally from Minnesota, her charm and hospitality still warmly mid-western, provided a calm and relaxing tour, history and tasting experience. Arkenstone was founded in 1988 and planted in 1998 with their inaugural vintage in 2006. The majority of wines are with estate fruit and two small projects that are non-estate. Today, Sam Kaplan is the winemaker extraordinaire. On staff and with us for the tasting was the knowledgeable Ashley Broshious, an Advanced Sommelier and studying for her Master Sommelier test this summer.

Now back to the “underground world of Arkenstone”. As we descended the stairs off the patio, it had a feeling of going down the rabbit hole. The difference however is that Alice in Wonderland didn’t know where she was going – here, Susan certainly did. What transpired was a viewing deck for this enormous cavern with all the production equipment, tanks and storage of barrels. The two pictures are 180 degrees in opposite directions. 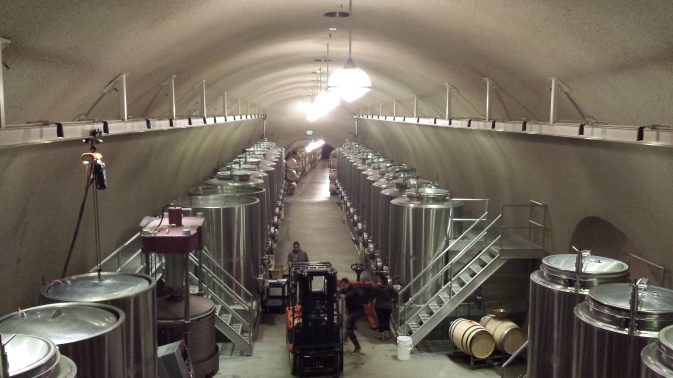 When compared to the above ground portion of the winery, one is awestruck with the immensity of the cavern. Not seen in the pictures are the “side streets” of the caves. With this size Arkenstone’s production today is approximately 2,000 cases in total. Susan and Sam mentioned they do production for several other small wineries in the area. Besides the “grandeur” of the caves, what strikes you both above ground and in the caves is the pristine cleanliness and quality of construction.

As with Alice in Wonderland, I was wondering what the next surprise would be. It was shortly found out that the wines were even more intriguing. We started off with a Sauvignon Blanc that was 3% Semillon, 1/3 done in a cement egg, 2/3 in oak. The grass and mineral tastes were refreshing. The next wines, two separate years of Obsidian Cabernet Sauvignon was the big and final surprise. A Bordeaux blend of 70-74% Cabernet Sauvignon with varying percentages of Cabernet Franc, Merlot, Petit Verdot and Malbec. The nose was impactful with blueberries, blackberries and mocha. The integration of varietals and nose were near perfect with a velvety texture.

After the tasting, you can truly understand why the name Obsidian was chosen for their flagship Cabernet – as one definition calls Obsidian “born out of quickly cooled volcanic lava, so it has the potent energy of the interaction of several and powerful elements—fire, earth and water”. So it is with Arkenstone- truly a powerful and integrated wine.

[…] nose. Black cherry, chocolate, blueberries and red cherries in the palate.  (Read the story at: https://californiawinesandwineries.com/2016/01/18/arkenstone/ […]