Lavender Ridge Vineyard – You get to pick the title of this article!!!

Yes, I understand this is not the way to start off an article, as you normally have to engage with a snappy title of an article. So let me explain, that with Lavender Ridge Vineyard there were simply too many titles one could use to “catch your interest and attention”. So I will be using “possible titles” and you, the readers, get to call out your favorite title for this article! 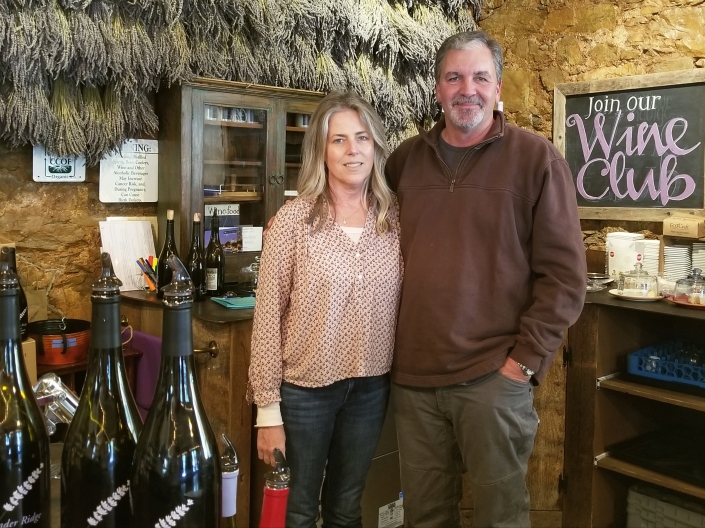 Here we have Rich and Siri Gilpin who started the business in 2000, planted a vineyard in 2003 and started selling wine on Main Street in Murphys in 2005. The first years, when there was only 3 wineries on Main Street as opposed to twenty-five or so today, so they were one of the first. Rich grew up on the San Francisco peninsula and Siri in Winnetka, Illinois. Rich study enology and viticulture at UC Davis and was fortunate enough to also work in “an experimental field” passing his classrooms knowledge thru his toiling hands in the field to making wine. The best of both a priori knowledge and a posteriori knowledge – theory and practical experience. One of his first jobs finishing at UC Davis was in Sonoma. Siri, after leaving Winnetka, Illinois, attended and graduated UC Santa Barbara with a BA in Sociology. She then pursued doctorate studies in Marriage and Family Counseling at Sonoma State University. It was there where she met Rich, who got the job working as an Assistant Winemaker in 1993. Later, they spent 10 years in El Dorado County at Wind Walker but always wanted to move to Calaveras County where Rich had spent some time at a family property. In 2000 they purchased the property and within three years had it planted with vines. Those vines provided their first estate release in 2006. The tasting room on Main Street opened in 2005 with wines from grapes gathering from various vineyards. Today they get 70% of the fruit from Calaveras County and the remainder mostly from the Sierra Foothills. The name Lavender Ridge, came from some health challenges of their children and the positive effect that Lavender (and other herbs) played in strengthening their immune systems, ultimately helping them get well. 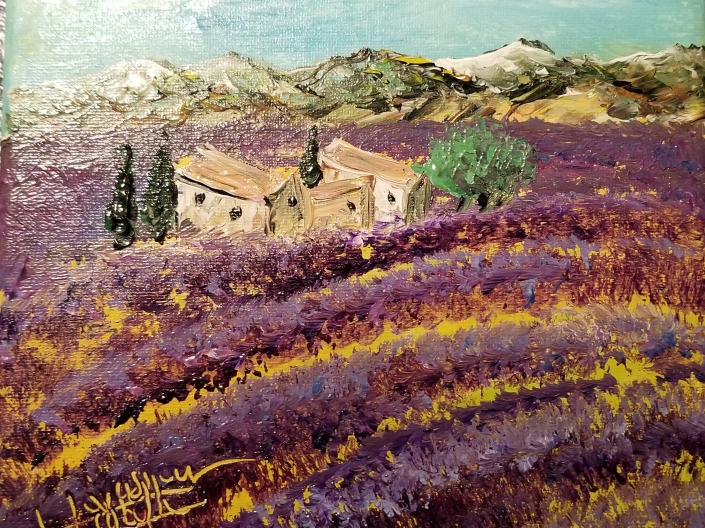 Possible Title #2 – The Tasting Room, More Than You Think
While not discussing this in detail during our interview, they run a rather unique tasting room. It is truly three businesses in one. First is obviously the rustic tasting room for walk in traffic. Here is where you can simply walk in and taste typically six of their current wine releases. In the back, is their Rhone Room where you can make reservations to small groups or several individuals up to 20 people. Here they are focused on presenting Rhone varietals. It is here where they have a Lavender boutique of various products. Their second tasting room Coppermine features Bordeaux varietals. (Click on https://californiawinesandwineries.com/2016/06/27/coppermine-winery/ ). The second thing you notice is the Artisan Cheese Market they display in the walk-in tasting room. They also have an entire wall decorated with items for sale. The third aspect of the business is their profound use of pairing their wines with artisan cheese. During the year they hold many events focused on the two. Topics of the ones coming include: Romance of France, Sheep Chevre, Best of Cheddars, etc. These are held via reservations and presented by Judy Creighton a certified cheese professional. Usually four wines and cheeses to compare and contrast. Personally, I have been buying from their specialized cheeses for two years but did not know they offered these classes/events. You will be seeing me signed up shortly as the cost is nominal.

Possible Title #3 – Wine Which Show Creativity and Pushing the Limits

So in discussing Rich’s winemaking capabilities, the first question was his style or what he is trying to provide via his wine making skills. His answer was simply perfect, he wants to show the expression of the varietals. He does not do blends or add 5% or 10% of this or that to present a preconceived notion of how a varietal should look like by “artificially adding a darker varietal”. Simple and truthful. To this end he uses only natural native yeasts so as not to upset the expression. To quote Rich this makes his wines “fruit forward and easy to drink”. He does work to balance acidity and tannins to make his wines rounder and fuller flavored. This results in his words, “rounder and fuller” wines. Having tasted two of his “prized wines”, his Grenache done in “concrete eggs” for minerality and keeping the lees naturally moving, and his Mourvèdre they were “light colored”. Having to dismiss my preconceived ideas of coloring, the floral aroma of both were “other worldly” wonderful. He mentioned some consumers come in and summarily dismiss his wines due to the “lighter coloring”. Just a thought that if they provided blacked out tasting glasses he would sell out in half the time! By the way, his wines generally sell out despite the “lighter coloring. 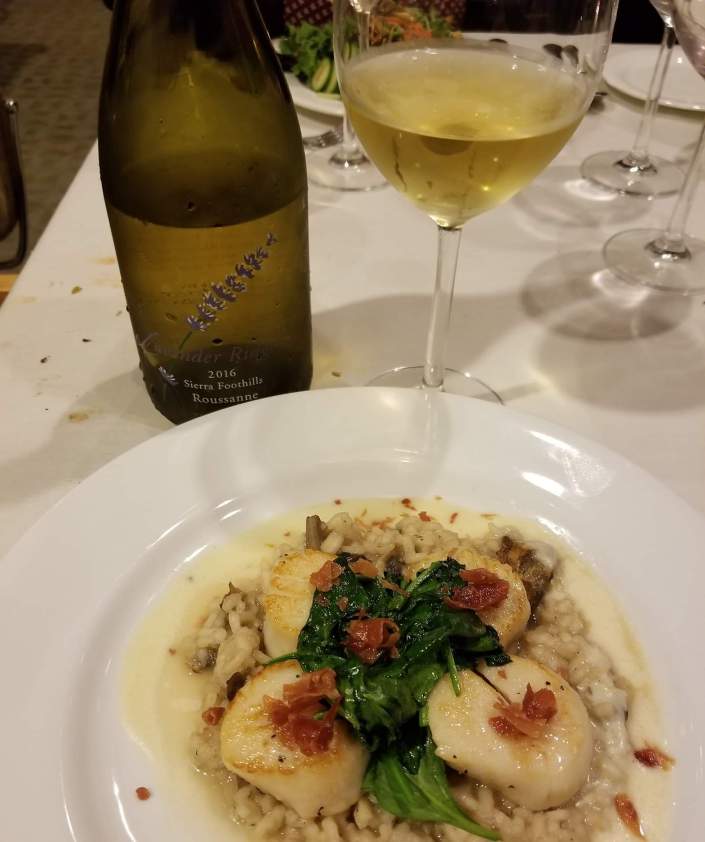 The wines are fabulous including his 2016 Lavender Ridge Roussanne, Double Gold Winner in Sierra Foothills Competition. This paired with pan seared scallops, with porcini mushroom risotto with sautéed spinach and lemon beurre blanc. An excellent pairing and a real treat!

One other wine enjoyed while talking with Rich and Siri, one was their newly released Grenache Rose. The boutique was heavenly, fresh with a unique shade of pink. A perfect warm weather, patio wine!

Possible Title #4 – Leading Technologist in Calaveras
Rich has constantly re-invested back into the winery with state of the art equipment. He was the first in the county to purchase and use a cross flow filter. A portion of business is also acting as a custom crush house for various wineries. Here I believe is a remarkable story. He, like so many winemakers in the state of California, have been fighting “smoke taint” for the last few years. He had received some grapes / juice that had a distinct smoke taint characteristic. Rather than jeopardize his reputation and quality, he simply poured his juice down the drain. At his “custom crush” operation, a winery came to him with similar smoke tainted grapes/juice. He asked and received the same advice from Rich to simple pour out the wine but with a caveat. Like any solid winemaker in the state of California with constant and inevitable forest fires, sadly smoke taint is a yearly occurrence. He offered to spend his time and money with this juice working on reverse osmosis and a newly discovered way of treating smoke taint with enzymes. This was to take away free and bonded particles out of the wine, especially from the sugar compound. This was provided the wine would not see any consumer, but be a noble wine experiment. It is underway and his results will know later this year.

Possible Title #5 – The Future of the Wine Industry

We spent some time talking about how to transition from Baby Boomers to Millennials/Gen-X/Gen-Y with the tasting room, varietals, etc. How tasting rooms have transitioned to “wine bars” instead of an opportunity to taste what the winemaker has produced by a varietal. This portion of the discussion was unfortunately cut short as we already spent over twice the allocated time. We will have an opportunity later to follow up and stay tuned for an upcoming article on the subject.

Conclusion: So I have only touched briefly on five far ranging subjects on Lavender Ridge Vineyard and their wines, products and overall business. Thus as I stated in the opening salvo, a title of this story was going to be too limiting and not show the vastness of their operation, offering and character. So you the reader can name the article, but at some point, to fully appreciate Lavender Ridge Vineyard, you will need to visit and taste some remarkable wines.

For wine reviews and Blogs:
https://www.facebook.com/CaliforniaWinesAndWineries/

One thought on “Lavender Ridge Vineyard – You get to pick the title of this article!!!”

They certainly seem to be doing a lot! I vote for The Tasting Room, More Than You Think. any tasting room that offers cheese is a winner in my book! Plus I love lavender! I can’t walk past a plant without grabbing a flower and rubbing it between my hands !